BY JENNIFER DOBNER via Reuters 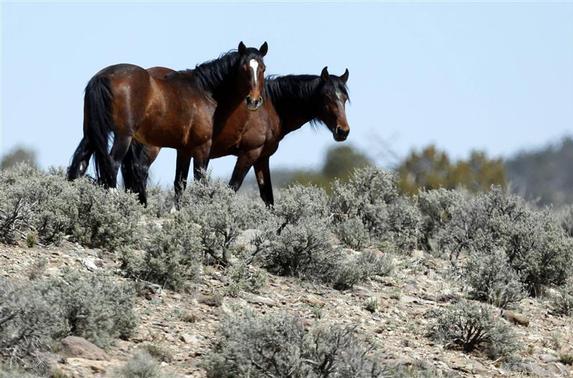 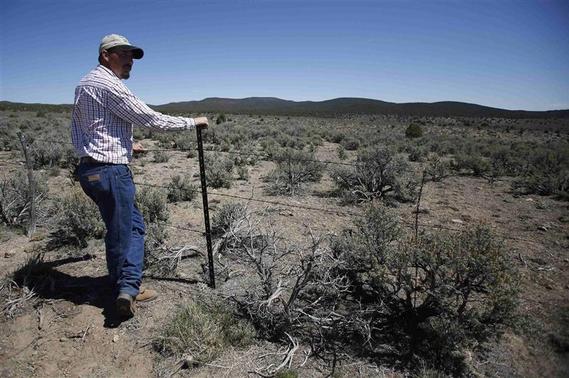 1 OF 2. Two of a band of wild horses graze in the Nephi Wash area outside Enterprise, Utah, April 10, 2014. CREDIT: REUTERS/JIM URQUHART

A Utah county, angry over the destruction of federal rangeland that ranchers use to graze cattle, has started a bid to round up federally protected wild horses it blames for the problem in the latest dustup over land management in the U.S. West.

County officials complain the burgeoning herd is destroying vegetation crucial to ranchers who pay to graze their cattle on the land, and who have already been asked to reduce their herds to cope with an anticipated drought.

Wild horse preservation groups say any attempt to remove the horses would be a federal crime.

On Thursday county workers, accompanied by a Bureau of Land Management staffer, set up the first in a series of metal corrals designed to trap and hold the horses on private land abutting the federal range until they can be moved to BLM facilities for adoption.

“There’s been no management of the animals and they keep reproducing,” Miller said in an interview. “The rangeland just can’t sustain it.”

The conflict reflects broader tension between ranchers, who have traditionally grazed cattle on public lands and held sway over land-use decisions, and environmentalists and land managers facing competing demands on the same land.

The Iron County roundup comes on the heels of an incident in neighboring Nevada in which authorities sent in helicopters and wranglers on horseback to confiscate the cattle herd of a rancher they say is illegally grazing livestock on public land.

In Utah, county commissioners warned federal land managers in a letter last month that the county would act independently to remove the horses if no mitigation efforts were launched.

“We charge you to fulfill your responsibility,” commissioners wrote. “Inaction and no-management practices pose an imminent threat to ranchers.”

The operation was expected to last weeks or months.

Attorneys for wild horse preservation groups sent a letter this week to Iron County commissioners and the BLM saying the BLM, under federal law, cannot round up horses on public lands without proper analysis and disclosure.

“The BLM must stop caving to the private financial interests of livestock owners whenever they complain about the protected wild horses using limited resources that are available on such lands,” wrote Katherine Meyer of Meyer, Glitzenstein and Crystal a Washington, DC-based public interest law firm representing the advocates.

The BLM puts the free-roaming wild horse and burro population across western states at more than 40,600, which it says on its website exceeds by nearly 14,000 the number of animals it believes “can exist in balance with other public rangeland resources and uses.”

Wild horse advocates point out that the tens of thousands of wild horses on BLM property pales into comparison with the millions of private livestock grazing on public lands managed by the agency.

Wild horses have not been culled due to budget constraints, according to Utah BLM officials, who say their herds grow by roughly 20 percent per year.

Pressure on rangeland from the horses may worsen this summer due to a drought that could dry up the already sparse available food supply, according to Miller.

“We’re going to see those horses starving to death out on the range,” he said. “The humane thing is to get this going now.”

Adding to frustration is BLM pressure on ranchers to cut their cattle herds by as much as 50 percent to cope with the drought, Miller said.

A tour of Iron County rangeland, not far from the Nevada border, illustrates the unchecked herds’ impact on the land, said Jeremy Hunt, a fourth generation Utah rancher whose cattle graze in the summer in a management area split through its middle by a barbed wire fence.

On the cattle side of the fence, the sagebrush and grass landscape is thick and green. The other, where a group of horses was seen on Thursday, is scattered with barren patches of dirt and sparse vegetation.

“This land is being literally destroyed because they are not following the laws that they set up to govern themselves,” said Hunt, who also works as a farmhand to make ends meet for his family of six.

“I want the land to be healthy and I want be a good steward of the land,” he added. “But you have to manage both sides of the fence.”

Combat Shooter’s Handbook. Call for a pizza, a cop, and an ambulance and see which one arrives first. So, who does that leave to protect you, your life, property and family? The one and only answer is: YOU This Handbook is intended to help you exercise that right and meet that responsibility. Available in both paperback and Kindle versions.

Land and Livestock International, Inc. is a leading agribusiness management firm providing a complete line of services to the range livestock industry. We believe that private property is the foundation of America. Private property and free markets go hand in hand—without property there is no freedom. We also believe that free markets, not government intervention, hold the key to natural resource conservation and environmental preservation. No government bureaucrat can (or will) understand and treat the land with as much respect as its owner. The bureaucrat simply does not have the same motives as does the owner of a capital interest in the property. Our specialty is the working livestock ranch simply because there are so many very good reasons for owning such a property. We provide educational, management and consulting services with a focus on ecologically and financially sustainable land management that will enhance natural processes (water and mineral cycles, energy flow and community dynamics) while enhancing profits and steadily building wealth.
View all posts by Land & Livestock Interntional, Inc. →
This entry was posted in Public Domain, Public Lands, Uncategorized, Wild Horses and tagged public domain, public lands, wild horses. Bookmark the permalink.