…the global warming trend in the 17 years 9 months since August 1996 is zero. The 212 months without global warming represents more than half the 423-month satellite data record, which began in January 1979.

What is a mystery to me is how the “climate change” wackos explain (or reconcile) the coming (global cooling) and going (global warming) of the last Ice Age which occurred during the last years of the Pleistocene, from approximately 110,000 to 12,000 years ago.

That was a good while before the industrial revolution. Climate change? Sure. Anthropogenic? You gotta be shittn’ me.

Sure, your ocean front property might disappear–but you shouldn’t be concerned unless you have 120,000 years to hang around and wait for it.

Politicians like Barack Obama use the global warming idea to curtail people’s liberties. They look for a future in which no person, save a law-enforcement officer, an active-duty military service member, or a privileged person like themselves (or their chauffeurs), would so much as come within ten feet of a private automobile. That alone makes a population far easier to control.

Follow the money while you keep in mind that government bureaucrats (including publically funded “scientists”) are humans (evil, but humans never-the-less) and, as such, are motivated just like the rest of us—e.g. by their own self-interest. – jtl,419

By Terry A. Hurlbut via Conservative News and Views

The Blizzard of 2015 introduces a paradox into the global warming debate. It actually shows where global warming comes from. Global warming did not start with industrialization. It started long ago, at the peak of the Ice Age. The causes lie in and under the earth itself. And no act or policy of humanity started it, or can stop it.

A certain group of scientists have pushed the global warming  idea more strenuously than others. These men – Phil Jones, Michael Mann, Keith Briffa, Kevin Trenberth, and NASA’s own Jim Hansen – made their names household names. Sadly they did so by exaggerating, not so much the problem as the role of humankind in it. They sought to accuse humanity, and more particularly its captains of industry, of wrecking the planet for their own short-term gain. So they tried to suggest a planet-wide disaster would befall the earth in their lifetimes. Hence Michael Mann’s hockey stick, Phil Jones’ use of “Mike’s Nature trick” to “hide the decline,” and Kevin Trenberth’s near-scream about the “travesty” that he and others couldn’t show a warming trend. And pieces like this in The New York Times, from 7 February 2014, actually talking of “the end of snow.”

According to the RSS satellite data, whose value for April 2014 is just in, the global warming trend in the 17 years 9 months since August 1996 is zero. The 212 months without global warming represents more than half the 423-month satellite data record, which began in January 1979. No one now in high school has lived through global warming. Source: Christopher, Viscount Monckton of Brenchley. 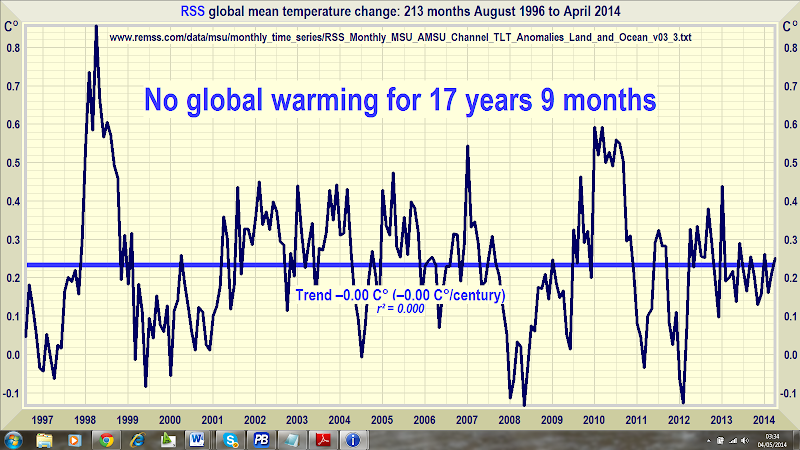 hey and other scientists did worse than exaggerate. They suppressed any opinion different from theirs. That stunted the debate. And it still does.

They also let a certain class of politician, and ironically another class of business magnate, to use them for their own ends. Politicians like Barack Obama use the global warming idea to curtail people’s liberties. They look for a future in which no person, save a law-enforcement officer, an active-duty military service member, or a privileged person like themselves (or their chauffeurs), would so much as come within ten feet of a private automobile. That alone makes a population far easier to control. And business magnates like Rajendra Pachauri use the global warming idea for the business equivalent of such power-seeking: rent-seeking. They seek to force people to buy or rent their energy from them. (To his credit, Dr. Hansen recommends developing another source of concentrated energy, namely nuclear. He runs at odds with his fellows by graciously allowing the laypeople access to any sort of concentrated energy.)

Members of both groups must limit the supply of energy. Hence the stalling on the Keystone XL Pipeline, and the latest initiative to stop development of fossil-fuel resources in Alaska. The goal: leave the oil and natural gas in the ground. There it can benefit no one, and contribute to the liberty of no one.

All these things fuel skepticism. Worse for the global warming alarmists, they use short-term time frames to influence debate. So other scientists can oppose them with ridiculous ease. Including Christopher, Viscount Monckton of Brenchley. He wrote this piece showing no global warming has occurred in the last seventeen years and nine months.

But neither Lord Monckton nor Drs. Jones, Mann, Briffa, Trenberth, or Hansen have the real answer. None of them are thinking long-term. That’s one reason they missed the real global warming trend.

Walter T. Brown, of the Center for Scientific Creation, tells us of the real global warming trend. It runs for a far longer term: four thousand years or more, not barely a quarter of a millennium.

The warming trend happened after a severe cold snap. We call that cold snap the Ice Age. Brown explains:

The global flood produced the special conditions that caused the Ice Age: temporarily cold continents and warm oceans. [See pages 110–146.] Crashing hydroplates at the end of the flood crushed and thickened continents and buckled up the earth’s major mountains, making the continents temporarily higher and, consequently, colder than they are today. Also, after the flood, oceans were warmer than today, primarily because so much magma spilled onto the floor of the Pacific Ocean. Warm oceans produced extensive evaporation and precipitation, which on the cold continents resulted in extreme snowfall rates that built up glaciers. Heavy cloud cover and volcanic dust further cooled the continents.

That happened fifty-three hundred years ago. The Blizzard of 2015 gives a small taste of what the Ice Age must have been like, and how it came about. A low-pressure cell over a warm ocean, brings moist air over cold land. The moisture precipitates out as snow. (That snow is falling now, at time of posting.) The lands did start to warm the minute the first glaciers started to retreat. But the oceans have their own source of heat: the magma immediately deep to the Pacific Basin. That same magma breaks out in the volcanoes that dot the Pacific Ocean, and form elsewhere. (Consider Mount Vesuvius in southern Italy, and Aetna, that now spell Etna, on Sicily.) And it has warmed the ocean enough to produce storms like the one that now will dump at least three feet of snow on Boston, Mass., and its suburbs, among other places.

Porter Fox at The New York Times wrote of an end of snow. He ought to have considered what global warming, from an ocean source, would really do. Not an end of snow. An excess of snow.

Where is the case against humankind?

Before one person can complain of another in a court of law, he must have standing to complain. Standing has three essential elements:

In global warming, certain people have an injury in fact. But by calling it anthropogenic, they tried to blame it on human industry and suggest a drastic remedy: de-industrialization. But global warming has run a course far longer than merely since the Industrial Revolution. One cannot blame it on one’s fellow human beings. Nor can one’s fellow human beings do anything to stop it.

That does not necessarily mean humans can do nothing to cope with it. Sadly, they can’t stop it or even slow it down. As Brown told CNAV this evening,

If you’re looking for any long-term investment, don’t invest in beachfront property.

Such property will suffer the greatest damage, then slip beneath the waves.

The scam about global warming was never whether it was happening, but whether one could blame humankind for it.

Is now available in both PAPERBACK and Kindle

Murray N. Rothbard was the father of what some call Radical Libertarianism or Anarcho-Capitalism which Hans-Hermann Hoppe described as “Rothbard’s unique contribution to the rediscovery of property and property rights as the common foundation of both economics and political philosophy, and the systematic reconstruction and conceptual integration of modern, marginalist economics and natural-law political philosophy into a unified moral science: libertarianism.”

This book applies the principles of this “unified moral science” to environmental and natural resource management issues.

The book started out life as an assigned reading list for a university level course entitled Environmental and Natural Resource Economics: The Austrian View.

As I began to prepare to teach the course, I quickly saw that there was a plethora of textbooks suitable for universal level courses dealing with environmental and natural resource economics. The only problem was that they were all based in mainstream neo-classical (or Keynesian) theory. I could find no single collection of material comprising a comprehensive treatment of environmental and natural resource economics based on Austrian Economic Theory.

However, I was able to find a large number of essays, monographs, papers delivered at professional meetings and published from a multitude of sources. This book is the result. It is composed of a collection of research reports and essays by reputable scientists, economists, and legal experts as well as private property and free market activists.

The intellectual level of the individual works ranges from quite scholarly to informed editorial opinion.

Land and Livestock International, Inc. is a leading agribusiness management firm providing a complete line of services to the range livestock industry. We believe that private property is the foundation of America. Private property and free markets go hand in hand—without property there is no freedom. We also believe that free markets, not government intervention, hold the key to natural resource conservation and environmental preservation. No government bureaucrat can (or will) understand and treat the land with as much respect as its owner. The bureaucrat simply does not have the same motives as does the owner of a capital interest in the property. Our specialty is the working livestock ranch simply because there are so many very good reasons for owning such a property. We provide educational, management and consulting services with a focus on ecologically and financially sustainable land management that will enhance natural processes (water and mineral cycles, energy flow and community dynamics) while enhancing profits and steadily building wealth.
View all posts by Land & Livestock Interntional, Inc. →
This entry was posted in Climate Change, Radical Environmentalism and tagged Barack Obama, Climate change, Global warming, Jim Hansen, Kevin Trenberth, Lord Monckton, Phil Jones, warming trend. Bookmark the permalink.