Basques in America: They got far on foot

Once upon a time a long time ago, I actually heard the President of the Sheep Growers Woman’s Auxiliary say at a meeting: “We have cattle for prestige in the community. We raise sheep to make a living.” — jtl, 419

by IKER SAITUA of the Elko Daily Free Press 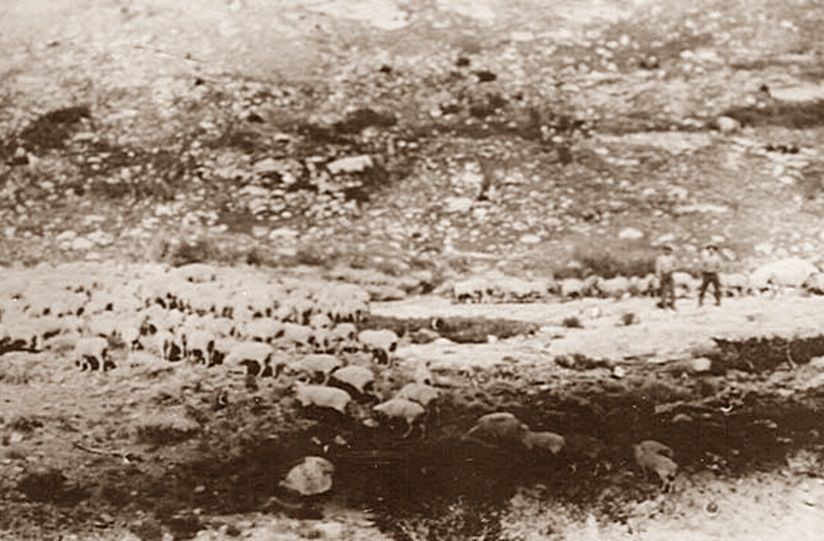 Elko is gearing up for its annual National Cowboy Poetry Gathering — the highlight of the year for the city. This is one of the biggest cultural festivals in the American West that celebrates its extensive ranching heritage. Festival visitors may partake in a series of events that feature cowboy poetry, storytelling, and western music.

This year’s theme pays tribute to the sheepherders of the West and particularly to the Basque immigrants who worked in the western sheep industry. In this way, Basque sheepherders will be getting recognition from the cowboy culture, many years after the end of the range wars between cattle and sheep interests that marked life in the West.

By the late 1880s, though their numbers were relatively few, a handful of Basque immigrant families, such as the Altubes, had created an ethnic economic niche based largely on the open-range sheep industry. Taking advantage of the free and open range, these Basque pioneers

built up quickly thriving sheep operations which opened a floodgate for further Basque immigration. This resulted in an expanding process of chain migration, which channelled Basque newcomers into the bottom ranks of the sheep industry and promoted the development of kindred networks. Thereof, an occupational concentration process occurred with the arrival of more Basque immigrants who settled near and worked as sheepherders along with their countrymen in the American West.

But they came late to the party.

Basque immigrants in the late 19th century were newcomers to an already established grazing empire based largely on cattle. In the 1890s, when an increasing number of Basque immigrants arrived in the West to work as sheepherders, their presence in the public ranges began to disturb the economic interests of the older cattle ranchers. The 1890s witnessed a remarkable boom in the sheep business of the Great Basin, especially after the disastrous winter of 1889-90. After such an extreme-weather event, the economics of sheep grazing seemed to fare better than cattle. Consequently, the number of sheep outfits multiplied and rangelands became more fully stocked. Then, competition between cattle owners and sheep graziers for the forage resources intensified, oftentimes flaring into violence. Contracted sheepherders, such as the Basques, bore the brunt of the resulting range conflicts.

By the turn of the century, just as the Basques began to become settled on the Interior West and some of them built prosperous sheep-dealing businesses, an anti-Basque movement began by cattle ranchers, conservationists, and some politicians. Basque immigrant sheepherders, with their flocks coming onto public grazing lands, were perceived as a serious threat to the cattle economic interests, sustainable agricultural development, and public interest in general. They were blamed for the number of interrelated economic and environmental problems affecting the public grazing lands. The increasing presence of Basque sheepherders in the public rangelands drew derision amidst a cowboy culture in the West.

This crusade against the sheepherders created the most pernicious image of Basque immigrants in the West, as the antithesis of the nationally venerated image of cowboys. While cowboys were viewed as the embodiment of the American frontier spirit through self-reliance and hard work who rode horses, sheepherders were denigrated as despicable and inferior class of laborers who walked long distances allowing sheep to roam at will across the wide-open range.

Somehow, the elevation of the venerable cowboy rested on the downgrading of the humble sheepherder. For a long time, there was a popular saying in Texas: “Raise cattle if you are looking for prestige, but raise sheep if you are looking for profit.” The social stigma carried by the sheepherding job was compounded by racial prejudice and discrimination too, that Basques could not escape. But despite everything, they got far on foot.

By the 1920s, the range wars began to draw to an end. Although these bloody conflicts eventually disappeared, raising meat on the hoof on the public ranges continued to be potentially troublesome. At the same time, while American cowboys became legendary heroes, sheepherders remained on the cultural margins.

But just as sheepherding was increasingly associated with a Basque immigrant culture, the sheepherder imagery improved progressively in Western thinking. Various factors and elements within the Basque-American community helped to shape the imagery of the sheepherders in a positive way.

My own preferred event in this process is the popularization of Basque-American cuisine in the West. And now, at this year’s National Cowboy Poetry Gathering, the Basque sheepherder will be recognized as a colorful Western figure by the cowboy culture: a gesture that reconciles their longtime differences on the public-domain lands.

Planned Grazing: A Study Guide and Reference Manual. This is the ideal squeal to A Handbook for Ranch Managers.  Although the ecological principles remain the same, what was originally known as “The Savory Grazing Method” now answers to a multitude of different names: ranching for profit, holistic management, managed grazing, mob grazing, management intensive grazing, etc. Land & Livestock International, Inc. uses “Restoration Grazing” under its “Managing the Ranch as a Business” program.” No mater what you call it, this summary and synopsis will guide you step by step through the process and teach you how to use it as it was originally intended. No more excuses for failing to complete your grazing plans.

Land and Livestock International, Inc. is a leading agribusiness management firm providing a complete line of services to the range livestock industry. We believe that private property is the foundation of America. Private property and free markets go hand in hand—without property there is no freedom. We also believe that free markets, not government intervention, hold the key to natural resource conservation and environmental preservation. No government bureaucrat can (or will) understand and treat the land with as much respect as its owner. The bureaucrat simply does not have the same motives as does the owner of a capital interest in the property. Our specialty is the working livestock ranch simply because there are so many very good reasons for owning such a property. We provide educational, management and consulting services with a focus on ecologically and financially sustainable land management that will enhance natural processes (water and mineral cycles, energy flow and community dynamics) while enhancing profits and steadily building wealth.
View all posts by Land & Livestock Interntional, Inc. →
This entry was posted in Sheep & Goats, Sheep and Goats, Uncategorized and tagged sheep ranching. Bookmark the permalink.