The Bureau of Land Management had been at odds with Bundy since 1993 when he refused to go along with their attempts to convert the grazing and water rights he owned into rented privileges for which he must pay their bureaucracy.

And he acquired those rights through long term and continuous “beneficial use.” No Mildred, the Feral (not a typo) government does not “own” these rights. Some of the ranchers in the West look at grazing fees as “taxes” on the grazing and water rights. Either way…it doesn’t amount to anything but armed robbery. — jtl, 419
by Bryan Hyde of the St. George News 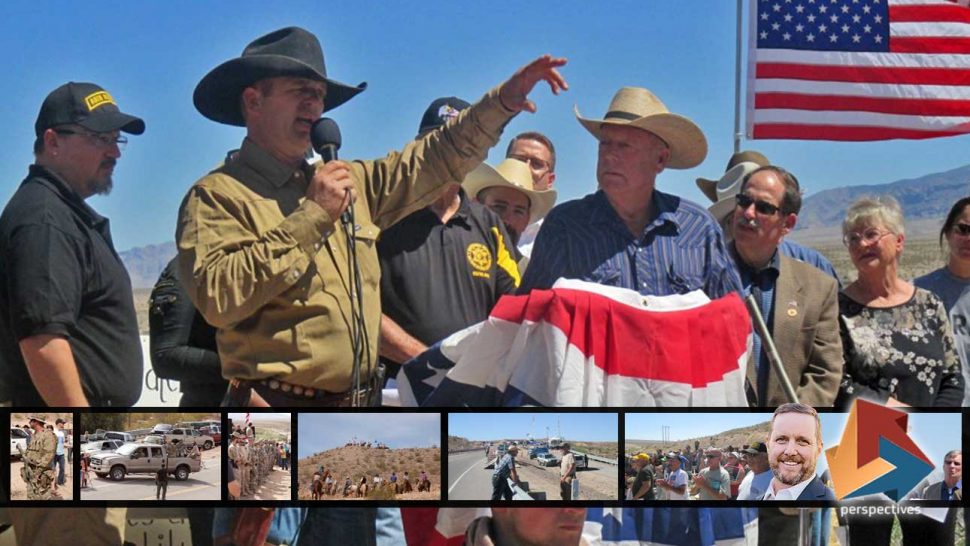 OPINION — The four-year anniversary of what some refer to as the Battle of Bunkerville came and went last week. It’s probably safe to say that we’re all a little surprised at how things have shaken out since the events of 2014.

Even just a short year ago, the fate of Cliven Bundy and those who stood with him still hung in the balance.

Few could have predicted that the charges against Bundy and others would be dismissed with prejudice and that most of them would be free men. Fewer still could have foreseen that the federal government’s flagrant disregard for justice would be the reason for that dismissal.

From the government’s point of view, the situation seemed like a slam dunk.

People who face charges in federal court are convicted 97.7 percent of the time. It’s not that every one of them are actually guilty or that the prosecutors and investigators are just that good.

It’s what you’d expect when going up against a politically-driven opponent with virtually unlimited resources and time. Often defendants will take a plea deal for a lower charge and lighter sentence simply because if they take it to the jury and lose, the sentence will be much worse.

The Bureau of Land Management had been at odds with Bundy since 1993 when he refused to go along with their attempts to convert the grazing and water rights he owned into rented privileges for which he must pay their bureaucracy. Over time, as the BLM underwent management changes with the election of a new administration in 2008, the decision was made to find a way to bring Bundy into compliance.

the fact that Bundy’s cattle eating forage on a vast, untamed desert landscape did not victimize the American people

It’s essential to understand the fact that Bundy’s cattle eating forage on a vast, untamed desert landscape did not victimize the American people in the slightest. Only the U.S. government could maintain with a straight face that for those cattle to eat grass without its bureaucrats being paid a fee constituted a crime.

In the meantime, Bundy continued to put hundreds of thousands of dollars worth of watering holes and related infrastructure into place, at his own expense. The water sources benefited every living creature in that harsh environment.

Several attempts to impound Bundy’s cattle ended in failure for the government when Bundy simply refused to cooperate with the attempted rustling. At no point was he violent with anyone.

As the BLM set about putting together a new operation to trespass the cattle off the disputed allotment, they had access to multiple threat assessments the FBI had done on the Bundy family. According to the FBI, the threat posed by the Bundys was minimal – as in the lowest threat level possible.

as long as they weren’t too heavy-handed or tried backing Bundy into a corner, the worst they might get is a punch in the nose

The BLM was informed that as long as they weren’t too heavy-handed or tried backing Bundy into a corner, the worst they might get is a punch in the nose.

Instead of heeding these assessments, the BLM, under the direction of Special Agent Dan Love, set about putting together the most militarized, aggressive and heavy-handed operation in its history. Why else would there have been a federal joint terrorism task force complete with SWAT teams, snipers and around-the-clock surveillance of Bundy Ranch in the weeks before the April 2014 impoundment?

Why else would a 200-man task force be sent to Bunkerville with orders to “kick them in the teeth” and to tase, manhandle and point loaded firearms at innocent people?

If the intent of the feds wasn’t to provoke a deadly confrontation, they were certainly missing a good opportunity. The lies they perpetuated about the Bundys set the stage for conflict.

All of this has come out in the trials that followed the events of that fateful day. The Wooten memo from a former BLM investigator further confirmed what the Bundys had said all along. A second Wooten memo remains sealed for now but could shed further light on what the BLM was up to – if the feds will ever deign to release it.

When the Bundys called for help, their fears of another Waco-style massacre at the hands of overly zealous federal agents were not unfounded. Those who answered that call were not madmen or malcontents; they were American citizens who saw firsthand how out of control our government had become.

The fact that they backed down a armed mob of government aggressors without firing a shot is as much a miracle as it is proof that firearms in the hands of the citizenry are an effective check on tyranny.

Jurors who were allowed to hear these truths rightly refused to convict the Bundys and others. Sadly, a handful of defendants who took plea deals or were convicted by less than fully informed jurors remain in custody.

The truth took nearly four years to emerge from darkness. But when it did, it set the Bundys and others free.

More importantly, it showed that those who rushed to judgment or who parroted the official narrative regarding the Bundys were mistaken. Making mistakes is part of being human.

How many will have the character to admit their error?

Bryan Hyde is an opinion columnist specializing in current events and liberty viewed through what he calls the lens of common sense. The opinions stated in this article are his and not representative of St. George News.

Land and Livestock International, Inc. is a leading agribusiness management firm providing a complete line of services to the range livestock industry. We believe that private property is the foundation of America. Private property and free markets go hand in hand—without property there is no freedom. We also believe that free markets, not government intervention, hold the key to natural resource conservation and environmental preservation. No government bureaucrat can (or will) understand and treat the land with as much respect as its owner. The bureaucrat simply does not have the same motives as does the owner of a capital interest in the property. Our specialty is the working livestock ranch simply because there are so many very good reasons for owning such a property. We provide educational, management and consulting services with a focus on ecologically and financially sustainable land management that will enhance natural processes (water and mineral cycles, energy flow and community dynamics) while enhancing profits and steadily building wealth.
View all posts by Land & Livestock Interntional, Inc. →
This entry was posted in Bundy Ranch, Uncategorized and tagged Bundy, Bundy Ranch, government land, public lands, Public Lands Ranching. Bookmark the permalink.