When asked for evidence to support bizarre, tone-deaf, I’m-living-on-another-planet claims like these, the so-called evidence always winds up like that article — either showing nothing of the kind, or indeed proving the exact opposite.

The Five Features of the Left’s Fact-Free Universe

by Tom Woods via LewRockwell.com
4-5 minutes

Shop all books by Tom Woods

Well, this is nice.

Apparently a left-wing mob showed up at the home of FOX News personality Tucker Carlson the other night while he was still at the FOX studio.

After receiving text messages about a commotion outside his home, Carlson called his wife.

People were chanting “racist scumbag, leave town!” and “Tucker Carlson, we will fight! We know where you sleep at night!”

In a since-deleted video, a woman can be overheard talking about bringing a pipe bomb to Carlson’s house.

The group’s Twitter account, “Smash Racism DC,” has since been suspended by Twitter. It had told Carlson that in the same way that his television program makes them feel unsafe, their presence outside his house was intended to convey to him that he was not safe, either.

Given Carlson’s downright heroic stances on Syria and Iran, in which he has been a lonely voice on the right, I couldn’t help posting the following on Twitter: 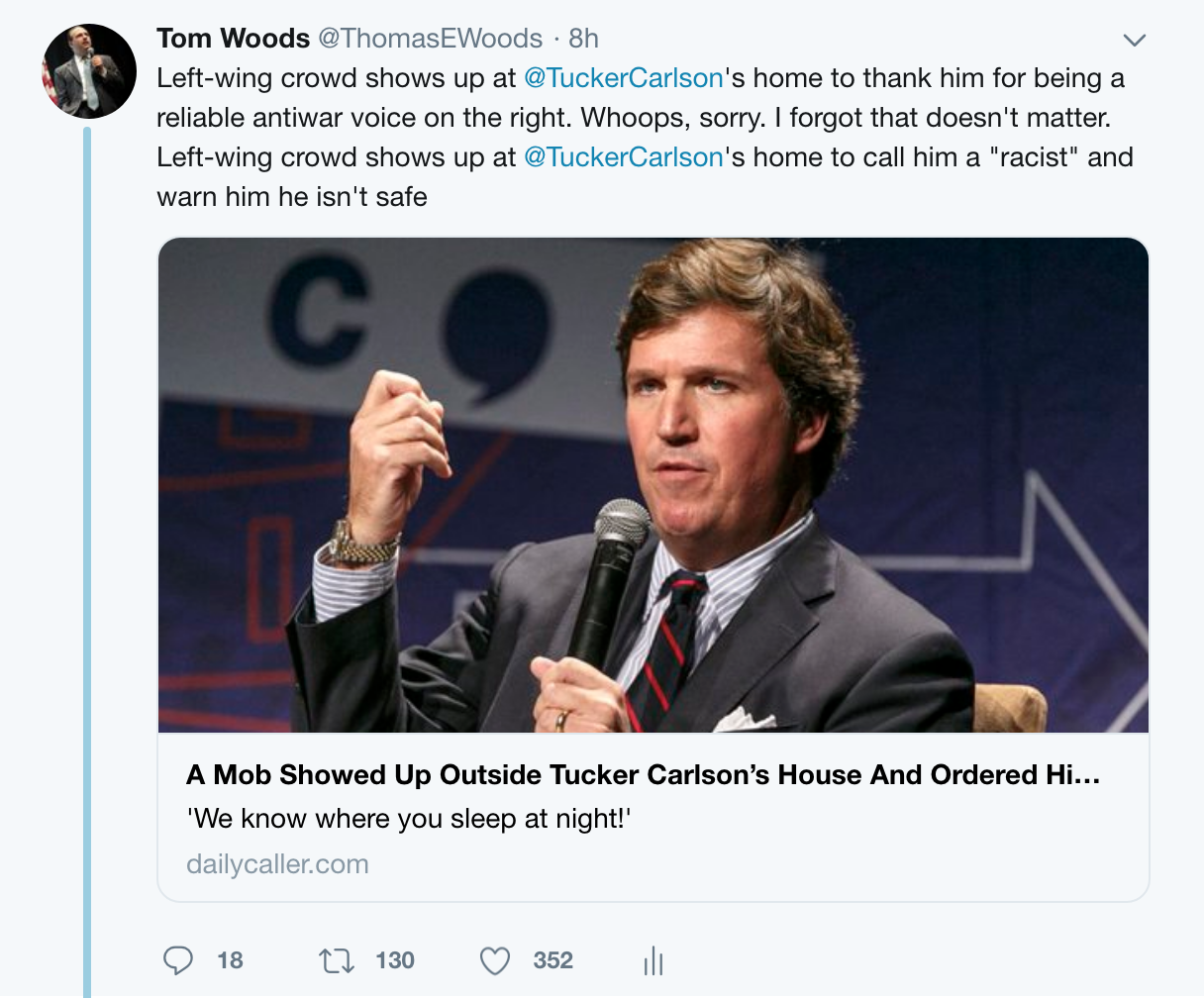 So according to this non-hysterical person, Tucker “is literally trying to stoke a race war.” Oh, and “lol.”

Now what, pray tell, would be the evidence for this? We obviously know, as soon as we read this, that it’s the usual left-wing hysteria. But is it based on anything at all?

Well, our friend linked us to an article she found called “FOX News Host Suggests Race War in America Could Be Coming After Brett Kavanaugh Hearing.”

We know that headline is exaggerated and crazy even without reading the article, but let’s see what it quotes Carlson as saying.

“Are you worried that if dumb people like [CNN senior political analyst] David Gergen or the rest at CNN keep up with the race hatred that that will actually encourage some kind of conflict? You see this in a lot of different countries. We really don’t want it here. But could we get there if they don’t stop?”

“I hate that,” Carlson replied.

So Carlson asked if his guest was worried about conflict fueled by race hatred, noting that “we really don’t want it here.”

This, according to our Twitter friend, is supposed to back up the idea that Carlson is stoking a “race war.”

He’s warning that conflict could arise if journalists continue down their present path, and that this is something to be avoided. Our friend takes this point and interprets it to mean the exact opposite.

Now you may say, “Woods, why focus on one deranged person’s Tweet?”

Answer: because this is the way millions of leftists think.

They live in a universe in which the GOP is about to abolish the welfare state, the Ku Klux Klan (which has somewhere between 3000 and 6000 members nationwide) is an influential institution, the United States has a “rape culture,” white nationalists can be found in many prominent positions, and “literal Nazis” are in the White House.

When asked for evidence to support bizarre, tone-deaf, I’m-living-on-another-planet claims like these, the so-called evidence always winds up like that article — either showing nothing of the kind, or indeed proving the exact opposite.

The fact-free universe they live in, which stokes their emotional hypochondria, motivates the mobs threatening people like Carlson.

The Best of Tom Woods

Land and Livestock International, Inc. is a leading agribusiness management firm providing a complete line of services to the range livestock industry. We believe that private property is the foundation of America. Private property and free markets go hand in hand—without property there is no freedom. We also believe that free markets, not government intervention, hold the key to natural resource conservation and environmental preservation. No government bureaucrat can (or will) understand and treat the land with as much respect as its owner. The bureaucrat simply does not have the same motives as does the owner of a capital interest in the property. Our specialty is the working livestock ranch simply because there are so many very good reasons for owning such a property. We provide educational, management and consulting services with a focus on ecologically and financially sustainable land management that will enhance natural processes (water and mineral cycles, energy flow and community dynamics) while enhancing profits and steadily building wealth.
View all posts by Land & Livestock Interntional, Inc. →
This entry was posted in Libtards, Uncategorized and tagged collectivists, communists, Libtards, Marxists, The Left. Bookmark the permalink.